The Australian Tesselated Tile Company was established in Mitcham in 1886, south of the station. It was founded by E. E. Walker and was originally named the Australian Tesselated Tile and Brick Company, continuing thus until 1895 when the word “Brick” was deleted. The products ﬁrst made were U-shaped drain tiles and quarry (paving) tiles. It almost collapsed after the end of the land boom of the 1890s, then recovered to become one of the world’s great tile works, making a greater range of tiles than other known tile works, in Australia or overseas.

“The Tess”, as it was known, was a major local employer and thanks to the suitability of the clay was able to produce a great variety of products from small tesselated tiles to glazed wall tiles and roof tiles. The company ceased operations in 1966. 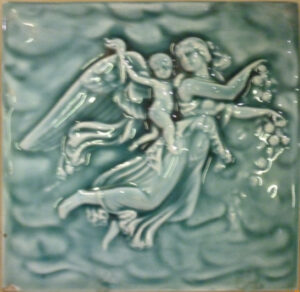 NA341; NA342: Here on display at our museum are two particular tiles attributed to Emma Scott, an artist and designer employed by the Australian Tesselated Tile Company. Emma, who designed and painted ‘The Morning Angel’ and ‘The E’ening Angel’, was a Mitcham girl. She had studied painting at the art school run by the National Gallery in Melbourne before working in the studio at Walker’s pottery. 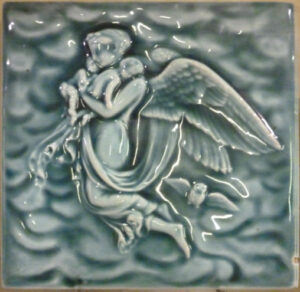 Edgar Edward Walker was born on January 29, 1862 in Clarke Street, Northcote. Not much is known of his childhood. He was approximately twelve years old when he was taken as an apprentice by tile manufacturer Henry Cawkwell. This is where E.E Walker learned the trade that would make him famous.

In 1885, Walker displayed some of his tile creations at the Melbourne International Show and his work attracted the attention of the Wiseman brothers, who offered Walker a position as Manager and Secretary at their new Mitcham works. He was offered £3 per week and 10% of the profits. The Australian Tesselated Tile Company (ATTC) was formed in 1886.

In 1922, Walker took ownership of ATTC, by that time the largest industry in Mitcham. He had a reputation as a kind and fair employer, often providing anonymous financial aid to those in need of help.

Outside of work, Walker was very involved in his local community. He was involved in ATTC until his death in 1936. Although ATTC no longer exists, the Walker legacy is still present in many parts of the Whitehorse area. The Walker Ceramic Award is still awarded annually to graduating ceramics students from around Australia.

Where to find us