From the early days of settlement in this district, fruit growing was successfully carried on. All orchards had their own dams for irrigation, pumps and gravity being used in conjunction for this necessary chore. Horse drawn carts took fruit to market for many years before motor transport took over.

Cup Day meant Sunday School picnics to Blackburn Lake in past years, but other picnickers also would arrive and help themselves liberally to the ripening cherries in the local orchards. Owners of these properties were always glad when this day was past.

Victoria can claim the distinction of being the first State in the Commonwealth to have cool storage of fruit, and the first to export pears overseas. The Somerset in 1910 took the first shipment of William pears. Victoria is still the main exporting State for pears, but ranks second to Tasmania in the amount of apples sent to other parts of the world.

The first cool-store in this district was a Government one at Doncaster; others followed later. The Blackburn Cool Store was opened in 1918, the first engineer being the former operator of the Box Hill–Doncaster tram.

In 1930, owing to difficulties with space and particularly with overseas markets, local growers decided to form a company, with an overseas representative to protect their interests. Pears were exported first, later apples, plums for a time, and for a short period, cherries to New Zealand.

This company, the Blue Moon Fruit Co-operative Ltd. has prospered and now has subsidiary companies in N.E. Victoria, Tasmania and Western Australia. Fruits handled are pears, apples and citrus fruits.

The Blackburn Cool Store was built by local orchardists, in 1918. It is a true co-operative with space allocated to each part- owner. A water-hole was built to provide water for the cooling system. It is still in existence today – bordered by indigenous eucalypts.

The ﬁrst engineer was Mr Hilton, the former operator of the Box Hill-Doncaster tram, and it was the Blackburn Cool Store that Pat Brice launched into ﬁfty-two years’ association with cool stores in Blackburn. He became known as the ‘Father of Packing’.

A ﬁre, believed to have started in the engine room, destroyed the original cool store. The explosion took place in the early hours of the morning and, next day, a cylinder was found in Morton Park. It had smashed the cricket pitch on the lower oval.

In 1938 the existing cool stores were built with a new engine room in a separate wooden building. The railway sidings, opened in 1918, are still in use today; although many refrigerated trucks dispatch fruit and other goods. The secretary is Mr Ted Irwin and the engineer, Mr George Bennie.

For the third year in succession, the Blackburn Cool Stores won the Governor-General’s Shield and the Challenge Shield as first and special awards at the Royal Agricultural Show for the best display of apples and pears and for the keeping qualities for the duration of the show.

The Company was formed on 8 October 1930 under the name Southern Victoria Pear Packing Company Limited and later changed to its present name, Blue Moon Co-operative Limited. The main objective of the Co-operative at that time was to export fresh pears and apples on behalf of grower members in the local area and also supply packing materials for this purpose.

The second shipment of fruit this season, by the Southern Victoria Pear Packing Co. Ltd. which has its headquarters in Blackburn, was loaded on SS Limerick. The shipment totalled 5698 cases, comprising 724 cases of plums, 1024 cases W.B.C. pears, 3880 cases Howell and 70 cases other varieties. The whole shipment was consigned to Mr Garford who recently sailed for London to act as the Company’s representative there. Mr Garford will arrange the distribution of the fruit in England.

During the early years Blue Moon Fruit Co-operative’s main exports were apples and pears, however, as the company progressed it diversiﬁed and expanded to export citrus, grapes, stone fruit, fruit concentrates and dehydrated fruit products. The company employed up to sixty female packers at one time, and each one was individually taught by chief packer and foreman, Mr P. Brice.

Among the founders were Messrs F. M. Moore, I. J. Tully, and F. I. Garford. The ﬁrst secretary was local estate agent Mr G. C. Karnaghan. The little ofﬁce was located on the corner of Chapel Street and Railway Road – where the Post Ofﬁce stands today. Subsequently the premises were relocated to 6o Railway Road. 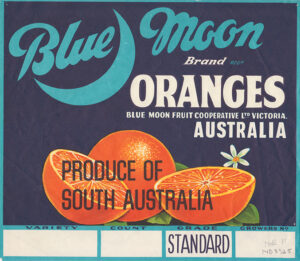 From its inception the company achieved rapid growth and the Blue Moon group of companies became one of Australia’s largest fresh fruit exporters with branches in Western Australia and Tasmania with packing sheds and cool stores located throughout Victoria, Tasmania and Western Australia. In 1972 the group in Victoria shipped a total of approx. 7 50,000 bushels of apples, pears and citrus fruit. In addition to exporting the company also imports a variety of packing materials, wrapping paper, orchard fertilizer and chemicals to supply the needs of the growers.

During the Second World War materials were made available to enable the Blue Moon to extend, and store food supplies for the Services.

A private saw mill in Cottage Street was taken over by the Blue Moon. It was enlarged and updated to make packing cases, but this in turn become uneconomical and the mill was later closed.

Up to 1950 there were fourteen chambers – all chillers – and all operative on fruit. The total capacity of these chambers was 220,000 cubic feet or 120,000 case space. All the fruit had to be hand stacked into the rooms and the same method was adopted in getting it out again. It was nothing to pack 80,000 to 100,000 cases of pears for export each year. The railway siding was used to transport fruit for up to three markets a week.

However, at this time it was becoming evident that fruit-growing was on the decline in the face of large proﬁts to be made from the demand for land after the Second World War. In the 1960s four of the old wooden chambers were converted into freezers. By the late 1960s it was clear that fruit from around the Blackburn district was diminishing fast, and from then on each year more chambers were converted from chiller into freezer. There were soon ten rooms on freezer and eight on chiller.

Where to find us